Coins of an emperor about to lose some face

One of the very many things that needed doing when I arrived in post at the Barber Institute, as you may recall, was to see about getting its coin collection onto the Internet. Some attempt had been made at this by Jonathan Shea in 2008, a representative selection of our holdings, but although that was a start it was only 200-odd coins out of 16,000, so still a little way to go. It took me some time to improve upon it, though; quite some time just to work out what needed to be done, still longer to work out how to do it, and by that time I’d already started putting volunteers to work on it and had to deal with the consequences of setting workflows before I knew what was best to do. The result was that it was March already before stuff finally started to appear online. But when it did, what stuff!

Gold solidus of Emperor Justinian II, struck in 695-696 at Carthage, Barber Institute of Fine Arts B4400.

Because I was reliant on volunteer labour to a great extent, I was also guided very much by what those volunteers wanted to work on. As it happens, though, quite a lot of people wanted to see or teach with coins of Emperor Justinian II (685-695 and 705-711), so it was just as well that one volunteer also needed to work on them for their undergraduate dissertation. They went through all our existing records for the coins of Justinian’s first reign, correcting them against what was in the trays and reference catalogues, and then typed those corrections into a spreadsheet. Then I proofed the spreadsheet, converted it laboriously into upload format and navigated the whole upload process until it was done. And the results are here! 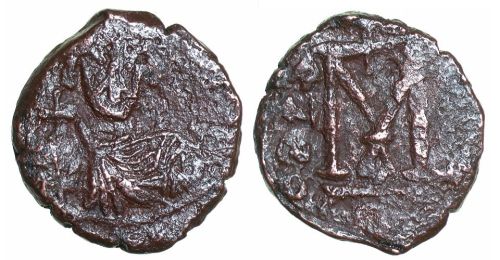 Bronze follis of Emperor Justinian II struck at Constantinople between 685 and 695, Barber Institute of Fine Arts B4395; from the sublime to the seriously heavily-used… Also not to scale, this is a good bit bigger than the solidi.

Justinian II is famous among early medieval historians principally for getting deposed in 695 and having his nose cut off, so as to disqualify him from returning to the throne. It wasn’t enough, since, allegedly adorned with a false nose made of gold (because why would you settle for less?), he came back anyway, executed his supplanter Leontius and the man who had since supplanted him, Tiberius Apsimar, in the Hippodrome and managed six more years of rule before his enemies finally decided to finish the job.1 There are various ways one can view this career, more and less favourable, but even this essentially laudatory write-up concludes, justifiably I feel, that “Emperor Justinian II of Byzantium wasn’t a brilliant military strategist, a capable ruler, a benevolent dictator, or even a… half-decent human being” (and the ellipsis is over obscene language, so if you’re bothered by such, don’t click the link, you won’t like it). For numismatists, though, Justinian II has a more particular importance, because in about 692, he seems to have decided to remove his own portrait from the obverse, ‘heads’ side of his biggest gold coins and replace it with one of Christ, relegating himself to the reverse, where he hung determinedly on to the Cross and was named not as emperor but as Christ’s servant.

Gold solidus of Emperor Justinian II struck at Constantinople in 692-695, Barber Institute of Fine Arts B4381. Its siblings B4380 and B4383 are currently on display in Inheriting Rome, so come and see for yourself!

There are various views about what was going on here, which I don’t think is obvious (or rather, several equally obvious interpretations spring to mind), and I will write about that a little way down the line, but a teaching point I like to make with these coins is that, whatever public image Justinian was trying to project with these coins, it wasn’t effective enough, as he was deposed and eventually killed anyway. I think this should make us think about the idea that coinage was somehow propaganda. But what should make us think about this still more is that this change only took place on the gold and silver coinage, and only at Constantinople.

Gold tremissis of Emperor Justinian II, struck at Ravenna between 685 and 695, Barber Insitute of Fine Arts B4422. Again, not to scale, this thing is about the size of a small fingernail…

So, on the bronze coinage that was the stuff anyone would actually have used in the cities every day, although Justinian’s coins did have some innovations (and we may have a unique one of them in the Barber collection) this changed policy of representation wasn’t reflected at all. Who was the audience for this propaganda supposed to be, exactly? To answer that, we would need to understand what the solidus was actually for and how it circulated better than we do, but for the time being, I like to think that it helps if you can look at the coinage as a whole.2 In which spirit, here are some links to particular searches for your enjoyment:

It’s all quite like actual numismatics, isn’t it? Thanks need to be added to this post to Emily Hancock, who did the spadework with printouts, catalogues and coins, and to Jan Starnes, wherever she may be, who did the original photography many years hence. Without them, it would have been a lot longer coming about!

1. Although I’ve never seen it, there is apparently a book-length study of the reign of Justinian, Constance Head, Justinian II of Byzantium (Madison 1972); some coverage can be found in John Haldon, Byzantium in the Seventh Century: transformation of a culture, revised edn. (Cambridge 1997), pp. 70-78, but my immediate reference here was Paul A. Hollingsworth, “Justinian II” in Alexander Kazhdan (ed.), The Oxford Dictionary of Byzantium (Oxford 1991), 3 vols, II, pp. 1084-1085.