How to escape one’s theoretical baggage in four pages

A while ago now, a long while indeed, I submitted an article somewhere and it came back with three more-or-less positive reviews and a request from the editor that I send it somewhere else. Giving up on that journal at least, I nonetheless wanted to place the thing somewhere and consequently looked over the reviews in detail. One of the reviewers, whom I’m pretty sure I can identify, was enthusing about the theories of the state they saw implicit in what I was expounding and wanted them made explicit. There was no doubt in my mind that this would make the article better, even though those ideas had been so implicit I hadn’t realised I had them; this is what a good critical review can do for one’s work… Anyway, the result of this has been that for the last quite-a-while I have been working my way through a Vienna volume called Der frühmittelalterliche Staat – europäische Perspektiven, edited by Walter Pohl and Veronika Wieser. This was the proceedings of a conference that was itself a follow-up to a previous conference and volume, with more people talking shorter than the first time round.1 There is an awful lot of arguing, largely in German, about concepts of the state, about whether these even apply to medieval polities or whether the concepts are too restrictive and should do,2 and especially a lot of wrangling about the German word ‘Staatlichkeit’, which has no English equivalent. If it were to be given one it would be something like ‘statishness’, the qualities by which one characterises an organisation as a state, and by extension ‘the manner in which a state behaves’. At least, I think that’s fair.3 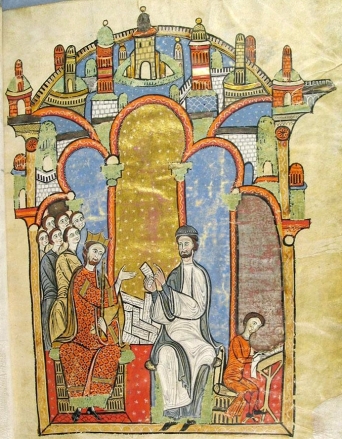 How does one picture Staatlichkeit? I Googled images for it and I’ve been reading the book so long, and had it in my sidebar here all the while, that almost all the images are from here… Thus, a reused one, King Alfons I and Ramón de Caldes reviewing royal documents in the Arxiu de la Corona de Aragó, as depicted in the Liber Feudorum Maior and looking a lot like state administration to me

There is a problem here that’s more than simply translation. I tend to be surprised and not a little put off when encountering much German scholarship by its wish to categorise the data of our sources according to ideal types, as if that tells us something about it that is greater than mere description would be. You’ve seen me complain about this when the categories are those of feudalism, but you can imagine a similar set of arguments around categories of state action and so forth. There is, of course, a counter-argument that says that my atheoretical positivist background leaves me doing this categorisation unconsciously, picking things that I think are important or interesting according to structures of thought I don’t acknowledge,4 and that therefore the model I’m characterising as German is more honest and correct, and I’m sympathetic to that whilst still thinking that going no further than categorisation and classification is a mistaken carry-over from the natural sciences that doesn’t advance our understanding. What I suppose this shows is that even when we’re conscious there’s a problem, it’s hard to entirely escape the preconceptions with which we were first equipped by our nazional-akademische Bildungscharakter, or whatever. Here’s a national-academic character portrait all right! This man is probably partly to blame, this being of course Max Weber, here aged 30, and some years before inventing the ideal type as a tool of social analysis. “Max Weber 1894” This file is lacking source information. Licensed under Public domain via Wikimedia Commons.

In this volume there is a piece by Steffen Patzold, oft lauded here of course, that I think performs this escape.5 It’s rather stylish. The simplest way to demonstrate it may be to type up my notes on his first section. They go like this:

“How staatlich is Karolingia? is it a state in any modern sense? It lacks, for some, a clear legal order or state monopoly on force, but some would argue over most states if Weber sets criteria, and Charlemagne and Louis the Pious etc. clearly have some conception of a state or polity, so their categories probably more important; it certainly can’t be called stateless. Our categories still wrong ones, though, not least as barely admit several UN member states now, and there are bits of Berlin or Paris where state doesn’t reach… while at other end of scale international organisations beyond and outside states now affect most of them. Political theorists now dodge the issue with term ‘governance’, and question becomes ‘what forms of social practice are institutionalised in a given collectivity’? At that point, opposition of medieval and modern state harder to see, and this question can be asked of C8th and C9th Francia without problems….”

I imagine that some of my choices of words there for his carefully-chosen German will make Steffen blanch, and it could probably be argued that I still haven’t really understood the full subtlety of it, but it’s still fairly powerful, I think; he starts well within the intellectual tradition people expect, with Weber and indeed by talking theoretical approaches for the first four pages of a thirteen-page chapter without using the first noun in his title once. Quickly, however, he goes for the obvious weak points in the old approach to break a door open, and assembles various newer work into a fresh approach that looks as if it could mean more or less the same thing but which has the great advantage of transportability. This goes, to me, to show the extraordinary value of being willing to adapt others’ theories. I’m not entirely sure who couldn’t use that question of their area of study, if they wanted, which puts it a long long way ahead of ‘Gab es Staatlichkeit oder Urstaatlichkeit in dieser Volksgruppe, und wie viel?’ or similar. I’ve learnt something I can apply to my article from most of the chapters in this volume but this is one I shall be able to take away and cite and think with. Thankyou, Professor Doktor Patzold!