Some more of that critical diplomatic

The first Leeds conference I went to was in 2005, and although I was not exactly in the money at that stage (not least because of having only been involved at very short notice to fill a gap in an acquaintance’s session) I did allow myself to buy one or two books. By now I know very clearly to avoid Brepols‘s stall unless I’m feeling very rich, their books simply can’t be afforded by normal people, but on this occasion I bought two, one because it was surprisingly cheap and one because it was brand-new and clearly vital to what I was working on. This latter was Scribes, souscripteurs et témoins dans les actes privés en France (VIIe – début XIIe siècle) by Benoît-Michel Tock.1 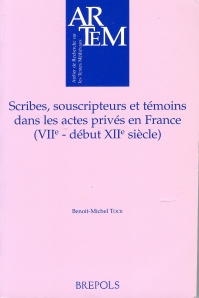 So, OK, let us not discuss how I was only reading this obviously vital book after owning it for more than eight years, after even meeting the author and in the meantime writing what I think is a pretty good round-up of current study in diplomatic; the answer would be something inadequate like, ‘the article I need it for has always needed so much more work than my others that it keeps getting put down the list compared to things I can finish sooner’.2 I did it in late 2013, and I could tell straight away that I had been right that it was vital, even if only giving me a good basis for things I already thought, and so you will be hearing more about it here for a little bit. For now, I’ll just give you a short extract so you can see why it caught me. M. le Prof. Tock wisely begins his book with a short round-up of issues backed up with a rather longer section of discussed examples, talking not just about the signatures on the documents but their diplomatic as a whole. In the case of his earliest example, though, an 848 donation to the cathedral of Rodez, these two overlap, as witness.3 I translate:

“The order in which the signatures were applied is not clear. The four autograph subscriptions constitute a sort of group in the middle of the signa: this is doubtless not by chance, and without doubt they were emplaced together. Was there a blank space left for them in the middle of the signa? No, because the signa at the end of the line are well adapted to them. Were they written before the signa? No, because they themselves are well adapted to the signa at the beginning of the line. In fact, the last line of signa runs very close to the penultimate one, doubtless so as not to impinge too much on the scribal signature. One must therefore deduce that the scribe wrote his own signature first, then that of the actor (the reverse also being possible) and those of Fréderic and Sigsimond. He then left the pen to the four autograph signatories, and took it back to insert, where he could, the six signa that were left for him to write. Why were Fréderic and Sigsimond entitled to this favourable treatment? Was the aim aesthetic, or was it perhaps because they were playing a particular rôle in the transaction (were they heirs of Allibert [the donor], for example?)? We do not know.”

This is the charter in question, Rodez, Archives Départementales d’Aveyron, 3 G 300 no. 1 R 162. M. le Prof. Tock benefitted in his research from the massive ARTEM database of all French-held charters from before 1121, which went online a few years ago, but inspection reveals that they have yet to add in the images that were the root of the whole thing, so this is scanned from Tock, Scribes, souscripteurs et témoins, p. 26, ill. no. 2, because the text is only fully comprehensible with it in sight.

“It is probable that the scribe wrote the actor’s subscription at the same time as the text of the act, and added those of Fréderic and Sigsimond to it at the time of the donation ceremony. This is at least what is suggested by the line spacing – normal before Allibert’s subscription, larger afterwards – and this corresponds to what one would imagine: the scribe obviously knew that the donor would be present at the donation (how could it be done otherwise?) but could not foresee what other persons would be present.”

This is very much the kind of reading of documents I think is important, and every now and then I try it here. It’s one of the reasons that working with original documents is so rewarding: from such tiny details one can get at the actual nuts and bolts of how people made these texts that we rely on and what the procedures of creating them may have been. I find this an unusually clear explanation of what the visual clues are that tell us such things, though, and am now very much looking forward to finally reading the rest of the book.

3 responses to “Some more of that critical diplomatic”