In Marca Hispanica XXII: how hard can it be to get at an actual charter?

Not all of the apparently many things I did in May of last year were in Oxford, however much it might seem that way. I actually managed to squeeze a short research trip to Catalonia in between teaching as well! Because of the short time available, this had to be very targetted, and the strategic priority was the project on priests around Manresa, bits of which have already turned up here. In May 2013 I was set to give two papers on this project in the next two months, and you may remember that while it had become clear that I was going to need access to the original documents to do it properly, so that signatures could be compared, I was not going to be able to get this out of the abbey of Montserrat, where most of Sant Benet de Bages‘s parchments have wound up. So instead, I had to try and get pictures of all the rest, or at least, all the rest where scribes about whom I was suspicious might occur. That actually seemed fairly feasible in a two-day trip, but it meant starting with this place, about which you have heard my reservations before. 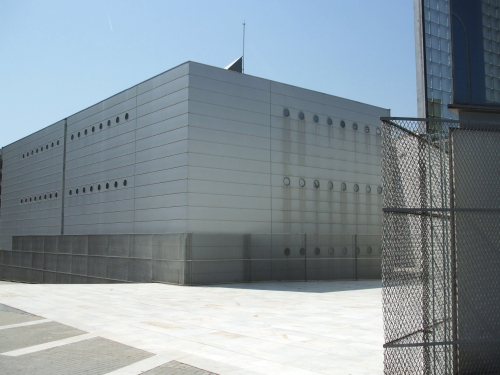 This is of course the Archivo de la Corona de Aragón. Despite its outward appearance, the ACA is actually quite a nice place to work. They have all the printed editions you might require, it is quiet, there are sufficient terminals to access all the digital resources and there are quite a lot of those, largely excellent, at which you can only get on the premises. There is also lots of desk space, but I don’t know why because the one thing they won’t let you do here is look at original documents. Sit with you and work through a useless microfilm, yes, talk you through the slightly arcane file structure of the digitised documents (based on the equally arcane eighteenth-century archival one, to be fair), but fetch up an actual parchment and put it in front of you, NO. (I subsequently discovered that they do in fact have to write to Madrid for permission to do this, so it’s not something you can achieve in a day at all.1) So I knew already that an order for reproductions was as good as I was going to manage, an order that was unlikely to be fulfilled in time, but which would hopefully stand me in good stead later. And they had actually simplified the process for doing this—there were now only four steps and none of them had to be approved in Madrid!—so I ordered digital reproductions of one charter from the Cancilleria, five from the Monacals d’Hisenda from Santa Cecília de Montserrat and, with some reluctance, one hundred from the Monacals holdings for Sant Benet de Bages, which was apparently the smallest subdivision of that collection one could order. I should have figured out why, but alas…

Archivo de la Corona d’Aragón, Monacals d’Hisenda, Pergamins de Santa Cecília de Montserrat, no. 6 recto, reduced from the much large image actually supplied to me. Here I was after Sunyer, whose signature you can probably distinguish at the bottom.

So, inevitably, these turned up way after the papers were given, but they did turn up, in an odd-shaped package that turned out to contain a CD-R and a roll of microfilm. The latter was why one could only order a hundred Sant Benet documents at once; the ACA are not, apparently, going to digitise whole microfilms for you on demand. But since I’d chosen and paid for digital images, this was extremely annoying; I was now going to have to digitise them myself, at my own expense. It damped considerably my delight at how good the digital ones they had been able to send me had been (and indeed always are, it seems). And worse was to come.

I’m pretty sure that on my original order form I’d ordered reels 1 & 2 from the collection (not realising that was what I was doing). The confirmation form that is part of the process however listed reels 1 & 8, and I didn’t stop to wonder why. Once I got the film onto a reader at Birmingham, however (because that’s how long this took, though on the other hand it turned out that the library here had just bought some software for digitising microfilm which they were keen to have tested) I found out: I had fifty documents from 1000 to about 1011, and then fifty more from the mid-twelfth century, all very useful I’m sure but sadly not to me. And while some of the relevant ones are like the above, unfortunately rather more are like the below:

Pergamins Sant Benet de Bages no. 20 recto, likewise after enhancement. The verso image here I just couldn’t distinguish to enhance, I’m still not sure the charter’s actually in it.

I haven’t seen the like of this for a while, because I’ve forgotten what badly-developed films look like. In the room where I was doing the digitisation, which suffers from too much daylight for imaging work, as said in the caption, I couldn’t tell in a couple of cases whether there was a charter in the photograph at all. But this is the official state of access to these documents. There are also several numbers missing in the sequence and two documents photographed twice. I don’t really feel that I got my money’s worth out of this, and it doesn’t seem that ACA did when they paid for the original photography. At least this may constitute an argument that gets me access to the originals next time I try…

Inside one of the reading rooms at the Biblioteca de Catalunya, once upon a time the fifteenth-century Hospital de Santa Creu

But folks, it doesn’t have to be like this, as I found even that same day (because since they wouldn’t let me actually see anything, I was done at the ACA quite quickly). So I trekked across town (photos will follow) and got myself to this place, the Biblioteca de Catalunya, which I’d never used before, and it became probably my second-favourite research library within the hour. It was no trouble at all to get a reader’s card, a five-year one even, and then it was equally unproblematic to identify and order up the five documents I wanted to see. And there they were, within half an hour, in plastic folders on my desk. And after I’d been looking for about five minutes, the desk attendant whom I’d asked about photography came back to tell me that actually these documents were all on the website, if that would make things simpler for me?

The website’s lovely, too, another obvious point of comparison. The ACA has a portion of a larger state site, and the only means of electronic contact is a form that doesn’t work. The BC not only has all kinds of social media enabled but also a crowd-sourced transcription initiative.2 One could be forgiven for thinking they actually wanted people to use their collections. And it is a lovely place to sit and read, indeed, and I hope to do so more in the future. But the contrast between it and the ACA could really not be more sharply drawn!

1. The person who told me this also suggested that one would need to sacrifice a black goat under a full moon for this to achieve any actual result, but obviously I’d guessed that already. (This is sarcasm, by the way.) The more canonical strategy for Spanish archives beloved of English investigators, to wit, buying the archivist lunch until he decides you’re OK (this is not sarcasm, it’s well tried and tested), won’t work at the ACA because its staff is too large and rotates, and in any case my Castilian’s not up to it…

2. They currently have up requiring transcription an unedited, unpublished tenth- and eleventh-century charter collection from the Priorat d’Organyà, and I tell you, it is very very hard not to procrastinate with that…

6 responses to “In Marca Hispanica XXII: how hard can it be to get at an actual charter?”