Seminar CLXVII: what about the women of post-Roman Britain?

Still running just about fourteen months behind, I find myself looking at some notes on when Professor Robin Fleming of Boston College came to Oxford on 4th March 2013 to give a lecture entitled, “Women, Material Culture and the History of Post-Roman Britain”. This was a combination meeting of the Medieval Archaeology, Medieval History and Late Antique and Byzantine Seminars and it was quite a busy occasion. I’m in marking jail right now so I shouldn’t be writing about it, probably, but the thing is that though the point was powerful it was also quite simple, so I’ll have a try at that thing I never manage, brevity.

The treasure from the female burial at Street House Farm, Cleveland, found 2011

Professor Fleming’s basic position was that although as is more than well-known our texts serve us poorly for the history and experience of women in early medieval Britain, and indeed the lack of attention to women in the texts could be taken to suggest that they were basically excluded from all importance, as recent DNA work has also tended to argue, the archæology gives a different impression: women were buried with much more wealth than men usually were while furnished burial continued, to the extent that women’s possessions now underpin our basic archæological chronology.1 Isotope analysis is also now showing up the extent to which women moved, meaning that we can no longer sustain an image of migration into England as a male-only operation. Of course, with greater knowledge come greater complications: not all the women moving are from where we’d expect them to be (and I’m sure the same could be said of the men, while I have heard some disparaging comments about the interpretations of the isotopic analyses from West Heslerton which formed Professor Fleming’s main example here, but I expect the point could be made in other places too).2 The other thing she was stressing to good effect was the great variation in rite, goods, origins and circumstances that the burial evidence shows us when it’s analysed for its lack of patterns rather than only the evidence that can be used to show correlations: this is a bigger point that we could almost always use considering.3 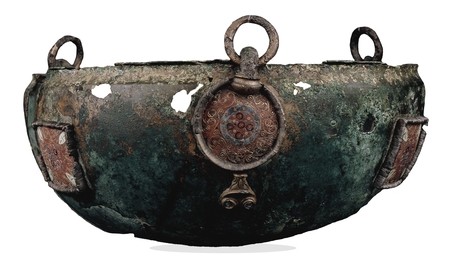 The Byzantine-style hanging bowl from the Sutton Hoo treasure, that is, an Eastern Roman object probably acquired from Western Britain to contain the remains of a person or an animal associated with the ruler of an Anglo-Saxon kingdom whose mourners seem to have wanted to stress his Scandinavian origins. Ethnic me that…

The other shibboleth that came in for a pasting here was that old target, ethnicity. As Professor Fleming has emphasised, the fifth and sixth centuries were a period principally of change in Britain: probably nobody knew who they were in the kind of national or population terms we use, perceived little enough kinship with their neighbours and would have defined and understood themselves in individualised ways that we just can’t reconstruct, though we can note the outward signs of some of those differences. The fact that there might be a way that people around here (or people from back home) did things that their neighbours or descendants imitated doesn’t mean that those people thought that by doing those things they demonstrated the same identity: a complex of symptoms of what we read as ethnicity was probably actually slightly different from person to person. In the terms of Bourdieu, every old habitus was now unsustainable and new ideas of who did what how were open for formation. And, as Professor Fleming concluded, “The work of building the new world was in the household”, where women took as large if not a large part than the men with whom they lived. In questions, this even reached the next world, because of course where was a burial organised? So all in all Professor Fleming delivered a powerful call for the appreciation of women’s agency in this formative period.

Opening page of a c. 800 manuscript of Bede’s Ecclesiastical History, the work of a man who would not have agreed with this post

I want a great deal of this to be right, which needs admitting, and I am pretty much prepared to follow her down the road as far as the idea that everyone was probably doing things differently and that ethnicity was not a real thing, but we have here this perpetual old problem that whenever we have them—which is admittedly not really for this period—our texts use such terms to try to understand these confused events. Ideas of genealogy and descent bringing significance in terms of what one could claim are self-evidently attempts to grab status thereby, then as now, but they do seem to be ideas that people had. If they were revived out of a period where people did not have them, that was a pretty speedy resurrection of the apparatus of oppression. I should make it clear that one thing that, as far as my notes and memory can guide me, Professor Fleming was not saying was that women were treated or thought of any better in this period than before or after, although the investment in their burial (at least, the burial of some of them) does have that kind of implication even if it could equally be about who their male kindred had been. All the same, this statement of a case feels now as if it should be vulnerable to the idea of the patriarchal equilibrium. Did women actually have more agency in this time of change than usual, or just more than we have supposed? Were these processes of building culture in the household not also going on at most other times, albeit possibly with more top-down direction? As I think about this now, it seems to me that there’s an important difference between agency and opportunity involved here, considering the which might get us a bit closer to the earlier gloomier view than I would wish, did I not gloomily suspect it’s probably accurate.

1. This was, I take it, a reference to the new typological chronology then very lately published in John Hines, Alex Bayliss, Karen Høilund Nielsen, Gerry McCormac & Christopher Scull, Anglo-Saxon Graves and Grave Goods of the 6th and 7th Centuries AD: a chronological framework (York 2013).

3. There are lots of good thinking tools for this kind of consideration in Howard Williams, Death and Memory in Early Medieval Britain (Cambridge 2006). Somewhere in these notes it also seems necessary to mention R. Fleming, Britain After Rome: the fall and rise 400 to 1070 (London 2010), of which pp. 30-88 cover the period with these issues in it and do not by any means miss out the women.

10 responses to “Seminar CLXVII: what about the women of post-Roman Britain?”