The need to catch up on the seminar reports is still fairly urgent, so I must do my now-usual filtering of what is in the pile. Out, with reluctance because it was good but with reassurance because as so often Magistra has already covered it, goes the second Clerical Cosmos conference in Oxford, but do go have a look at Magistra’s reports if the subtitle, “Ecclesiastical power, culture and society, c. 900 to c. 1075″, sounds like it should hit your interests. That at last takes me into the Easter term of 2013, and that term was greeted in Oxford by a paper by Mark Whittow to the Medieval History Seminar on the 23rd April entitled, “Territorial Lordship and Regional Power in the Age of Gregorian Reform: Matilda of Canossa and the Matildine lands”. 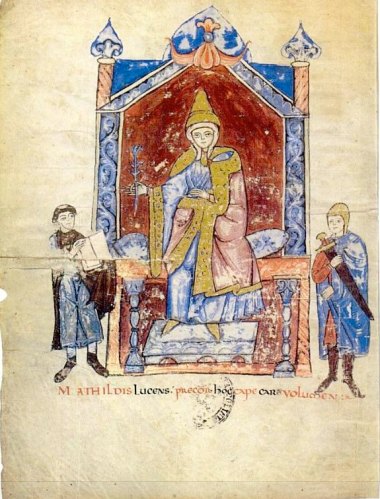 Countess Matilda of Canossa, enthroned with attendants, manuscript portrait from the Vita Mathildis by Donizone (who may be the cleric at her right)

This paper did the audience the good service of recapitulating Matilda’s career, something it’s quite hard to get in one place from literature outside Italy despite its importance in the politics of Germany and Italy (and especially both) in the time of the eleventh-century dispute of Holy Roman Empire and Papacy, and assessing her landed holdings.1 Out of this came several observations, one being that little enough of her focus was actually in her marquisate of Tuscany, where competition for power was perhaps not one-sided enough, and another being that while she is often represented as a champion of public office because she held one, her armies were formed of vassals based in castles even if the emperor had approved the grant of the castles. In other words, she was pretty much as feudo-vassalitic in operation as the Dukes of Aquitaine, even if she was more closely involved with a persistent and intermittently-powerful royalty than they were. Nonetheless, there was a difference in the discourse of power Matilda used, with artwork and manuscripts presenting her as imperially-descended and legitimate and traditional in a way the Meridional princes wouldn’t have used unless they went for Roman roots, as Christian Lauranson-Rosaz would argue they did in the Auvergne.2 That, at least, would have worked to undermine the claims of a royalty that drew its ancestry back to fairly recent, and certainly post-Roman, times, but Matilda was competing for the same grounds of legitimacy as her German royal opponents (and sometimes allies). So this was all very interesting and fitted Matilda into a different framework than the one where English-language historians usually meet her, but the thing that sticks with me is something that I had to raise in questions, that the pictures we have of her do, yes, twice show her on a throne, but they also consistently show her dwarfed by it, compared to her noble antecessors shown on the same throne in the same manuscript. The author of that manuscript knew the lady personally; it was hard not to conclude that the artist did too, and what he or she knew was that their patron was pretty small.3 This obviously didn’t make her any the less considerable, if so!

15th-century manuscript depiction of the Court of Common Pleas, London

Then the very next day the Medieval Church and Culture Seminar was lucky enough, as we were told at fulsome length, to be host to Professor Paul Hyams, who spoke with the title, “Disputes and How to Avoid Them: charters and custom in England during the long 12th century”.4 This appealed to me, predictably perhaps, as it was a paper about what the charters aren’t telling us, the trouble that a dispute settlement charter averts or that preceded its issue but which its scribe thought it impolitic to recount, at least from more than one side. It dealt with the invisible threshold of wealth beyond which written records were even available, specifically, and whether we can see serfdom in medieval England as early as it may start. I wouldn’t like to say that it concluded that we could, but the plea to consider what else was going on around the documents we have – the meetings, to and fro voyages of negotiation, the feast and the talk at dinner when a transaction was concluded, all of which probably explain a lot more about how a given transaction unfolded than does its surviving record – is a plea always worth hearing, especially when loaded with this many interesting examples.

4. This was work deriving from a project to follow up P. Hyams, Rancor and reconciliation in medieval England (Ithaca 2003), and I guess we can expect it to start some disputes as well as settle some…

One response to “Seminars CXXXV & CXXXVI: characterising some medieval disputants”