On being one of the barbarians

I had high intentions for this post when I made a stub of it many moons ago. I wanted, having read some thought-provoking scholarship and some argument-provoking blog comments, to write something trenchant about how what the people who seek to identify themselves with the migrating peoples of the early Middle Ages are looking for is not always biological race, which is inherently ridiculous to hang on to given the number of intervening generations diluting its supposed ancient purity (itself equally diluted from something else, of course), but a kind of either locational or cultural continuity, or both. And I wanted to contrast that to how fascinated people now get with tracing DNA mutations back, not to a modern or even ancient people of some kind, but beyond it to an origin group that doesn’t relate in any obvious way to where they are now or how they identify. There’s a number of arguments that could spin off this, one for example about how difficult it seems to be getting to confine the status of ‘human’ to homo sapiens as it turns out to share DNA with ever more other hominids, one about how the link between those two fascinations may most obviously be in the way that time renders their visible or functional effects irrelevantly tiny, or even the one about whether migration makes any long-term genetic difference that isn’t just as explicable by distance, but I can’t tell from my stub which of these, if any, I’d intended, so I’ve decided instead to just make a couple of glib observations about supposed barbarian identity and the modern day, one which I owe to teaching and the other of which came to me in a flash of hilarity during the summer.

The first of these was started off by a sharp set of observations in something I was reading about how rather too much scholarship for analytical neutrality has been founded in the idea that we, the scholars, represent civilisations in some way continuing the identity of either Romans or barbarians.1 Again, one could get serious about that, but I found it more fun in teaching to question our ability to call ourselves civilised. Witness this well-known piece of Roman writing by Sidonius Apollinaris,2 in a letter to his friend Catullinus:

Why — even supposing I had the skill — do you bid
me compose a song dedicated to Venus the lover of
Fescennine mirth, placed as I am among long-haired
hordes, having to endure German speech, praising
oft with wry face the song of the gluttonous Bur-
gundian who spreads rancid butter on his hair?
Do you want me to tell you what wrecks all poetry?
Driven away by barbarian thrumming the Muse has
spurned the six-footed exercise ever since she beheld
these patrons seven feet high. I am fain to call
your eyes and ears happy, happy too your nose, for
you don’t have a reek of garlic and foul onions dis-
charged upon you at early morn from ten break-
fasts, and you are not invaded even before dawn,
like an old grandfather or a foster-father, by a crowd
of giants so many and so big that not even the kitchen
of Alcinous could support them.

Now obviously this deserves the big flashing-green SATIRE warning once deployed by Monty Python, though despite that it’s been made to bear rather a lot of weight about the accommodation of barbarian warriors by Roman aristocrats.3 Taking it briefly at its face value, however, what would Sidonius think of us? The barbarians have won! We may not put butter on our hair (except maybe cocoa butter) but some of us do wear our hair long and, damn, do we cook with onions. In fact some of us even care where the onions come from: Spanish, French, English, all different… Again, not at breakfast maybe (though: hash browns? omelettes? don’t tell me you think an omelette is better without finely-chopped red onion in it) but pretty thoroughly otherwise. And as for garlic, there might have been a hold-out in England at least until the eighties but I’m not sure how many people you could still find considering it typically French now. I mean, there is (or was; its website domain has gone…) a restaurant in London dedicated to the noble alium, which horrifies as many people as it delights but which I’m pretty sure would have about killed Sidonius. Meanwhile, if you look around for the kind of things that Sidonius might have considered haute cuisine, it’s not the Romans who won, really, is it? The barbarians are us! What he would have made of Burger King can only be imagined, except to say that he would probably find a tiny relief that it was only a king…

Anyway. I’ve had fun with that as a teaching point, especially since it then leads into the whole question about how seriously it’s meant to be taken given the set-up, but more difficult, sometimes, is trying to find an analogy for barbarian identity if you want to push people away from an idea of tribalism based on genealogical descent. This is of course tricky given how much weight the barbarians themselves, or at least their leaders, could place on biological descent, even if it was often plainly fictive.4 The common analogy with football teams and their supporters doesn’t quite get you over this hump. But on the other hand, where in this day and age are you going to find a group of people with a distinctive and almost uniform appearance in terms of hair and costume, a quasi-militaristic presentation with elements of existing political iconography in it, and even aims of world conquest, who also claim to be kin to each other even though everyone knows it’s not true?

OH YEAH. Though, of course, you’d then need the distinctive material culture to be adopted by people who weren’t, and couldn’t even have been, part of the original movement… 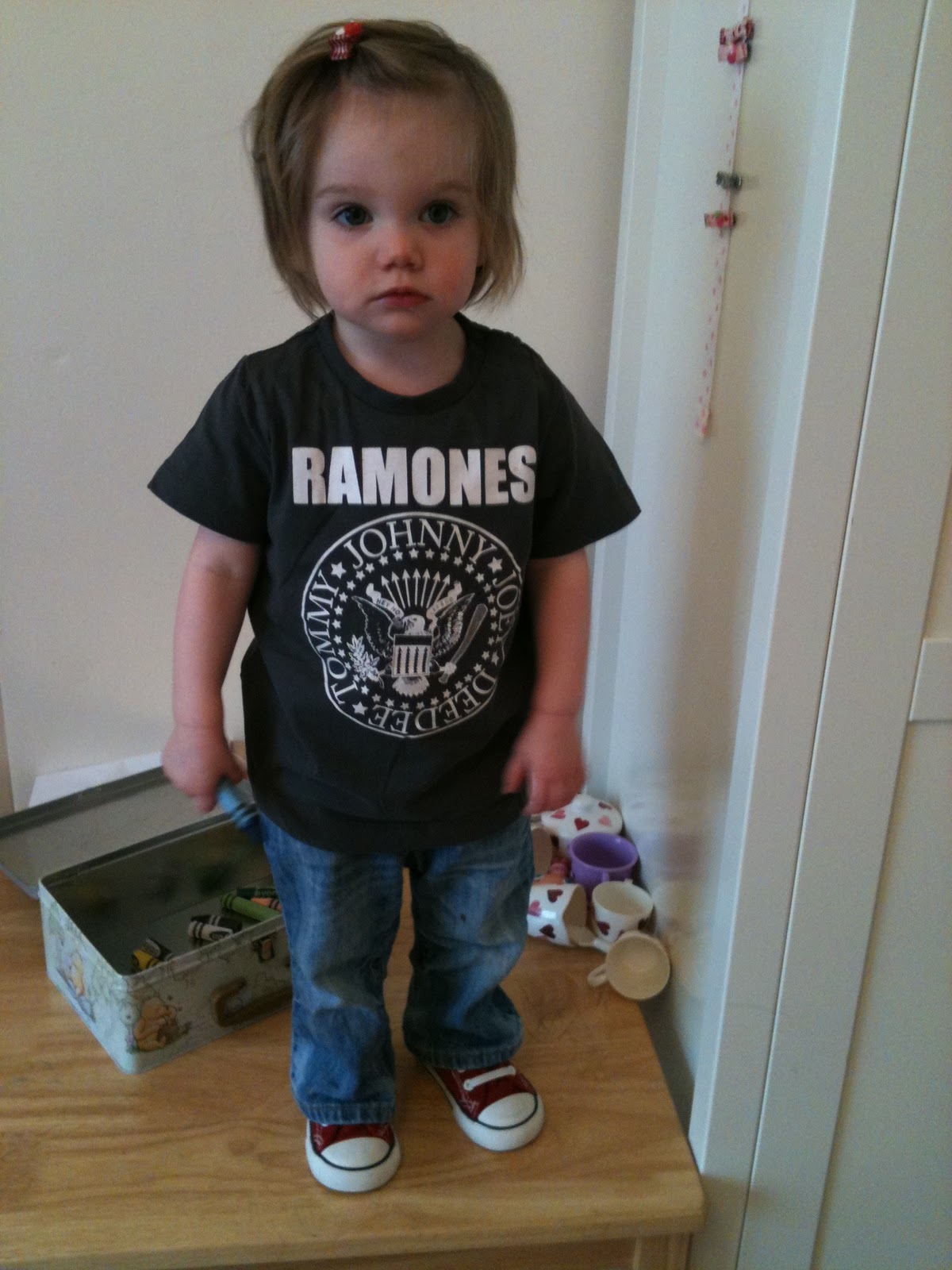 You’ve seen this. Not this particular child, probably, but you’ve seen it, and on people who get to choose their own clothes too.

Brilliant. Now, how do we incorporate this into a pedagogical context?

… I think we’re done here.5 I’d like to dedicate this post to the senior academic who told me off for requesting the Ramones at the Leeds dance and to all the people who danced anyway…

1. The scholarly writings that set this partly off were Catherine Hills, “Anglo-Saxon Attitudes” and Howard Williams, “Forgetting the Britons in Victorian Anglo-Saxon Archaeology”, both in Nick Higham (ed.), Britons in Anglo-Saxon England, Publications of the Manchester Centre for Anglo-Saxon Studies 7 (Woodbridge 2007), pp. 16-26 and 27-41 respectively and previously Hills, Origins of the English, Duckworth Debates in Archaeology (London 2003).

3. Compare Walter Goffart, Barbarians and Romans, A. D. 418-584: the techniques of accommodation (Princeton 1980), and specifically the pp. 3-39 repr. as “The Barbarians in Late Antiquity and how they were Accommodated in the West” in Lester K. Little & Barbara H. Rosenwein (edd.), Debating the Middle Ages: issues and readings (Oxford 1998), pp. 25-44, with Peter Heather, The Fall of the Roman Empire: a new history (London 2005), esp. pp. 192-202 where the same Sidonius poem comes out, taken more or less straight, and Guy Halsall, Barbarian Migrations and the Roman West, 376-568 (Cambridge 2007), esp. 417-454, using Sidonius p. 434. It will not be news to anyone who reads this regularly that I find Guy’s use of this and other evidence on this question most persuasive; he also has a more sustained and nuanced reading of the poem in his “Funny Foreigners: laughing with the barbarians in late antiquity” in idem (ed.), Humour, History and Politics in Late Antiquity and the Early Middle Ages (Cambridge 2002), pp. 89-113 at pp. 93-96, which I very much recommend. I owe my copy of that book to the kindness of Professor Matthew Innes.

5. Though if the fact that Joey professed here not to care about history bothers you, you might like to be reminded that one of his biggest fans sees the point…

15 responses to “On being one of the barbarians”