Kalamazoo and Back, V: say your piece and get

Sorry this has taken so long to complete. I actually put it off earlier today because of not having my notes before realising that I could actually remember pretty well because the only session I made it to on the Sunday was the one I was in… I’d have liked to see what my colleague Rory Naismith was saying in ‘562. Medieval Money: Coin, Trade, and Credit’ but as it was I kind of had to attend…

Session 536: The Court and the Courts in the Carolingian World

I had worried about sleeping late, given that this session was the morning after the dance and earlier than any of the others, but in fact nerves or drink-confused sleep had me awake quite early and I was on station in good time, both fed and caffeinated enough to make some kind of sense. And just as well because there was plenty of information to make sense of!

I don’t have any notes on the questions, largely I presume because I was standing up and answering, but I also presume that no-one bowled me anything that I had to incorporate into revisions; as I recall, in fact, Warren and Geoff got most of the questions not least because we’d been told they would fight and they’d more or less refrained from doing so, so people were trying to kick it off, all in good fun, people, all in good fun. I was fairly happy with how this all went, anyway, and thanks are of course due to Jonathan Couser for organising it and Julie Hofmann for her inestimable chairing.

After all this I very much needed coffee, so Another Damned Medievalist and I set off in search of it. It proved to be harder to find than I’d anticipated because of distance, and because of lack of caffeine oh noes recursion and because the main coffee options weren’t running on this last day. I had intended to make it to ‘573. Topics in the History of the Frankish Empire’, not least because one of the people presenting, Wes Bush, had made a point of getting himself introduced to me the previous evening and because he was also talking about the charters of Charles the Bald. In fact, though, by the time we were near the building it was ten minutes after start time and I didn’t have the energy to face down the late entrance so ADM and I went and looked for book bargains and there found both coffee and Steve Muhlberger, so we sat and nattered and then once we were more collected we got our various baggages arranged and piled into cars by prearranged scheme to go and eat at a diner in town, whose name I have unjustly forgotten because it was really nice. This was almost another blogger meet-up: besides myself, Prof. Muhlberger and ADM there was also the Notorious Girl Scholar and Lisa Carnell, the Congress Coordinator who doesn’t have a blog as far as I know but you know, give her a break, she obviously had her hands fairly full! and there was a sixth person who was furthest from me at the table and damned if I can now remember who they were which is really unfair on them and I do hope they’re not offended. I spoke of long-distance travel in Canada to Steve and goth dress-up to Lisa (some of my best friends, etc.) and again didn’t really get to talk to Dr N., but the food was extremely welcome and very much what was needed to set me up for the long journey home. I also owe ADM and Lisa considerable favours for letting me get at and borrow a printer to reprint my plane ticket; what happened to the original I have no idea, but it went, so I would been a bit stuck without them: thankyou both. 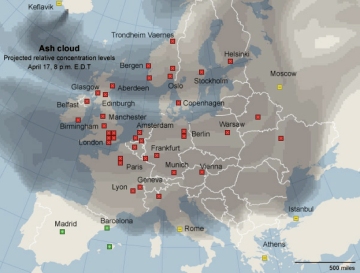 Delivered back to the Goldsworth Valley Complex, we found firstly that some really enterprising tagging of one of the exhibitors’ lorries had happened while Lisa’s back was turned, and then that the buses to the airport were not exactly running to timetable. In fact they were making it up on the fly, it became clear once I’d got on one, and this meant that people asking whether this was the bus scheduled for such-and-such a time got some fairly unhelpful, if amusing, answers, because there wasn’t really a right one. I got to the airport in the end and there had the company of Dr Catherine Rider, whom I’ve known a long time and whom I’d seen at several points in the Congress and not actually been able to catch to say hi to. Eventually, though, there was a plane, stuffed of course with medievalists, and then another plane, just about. There was also an ash-cloud, of course, and as I arrived in the international departure lounge at O’Hare, the flight four hours before mine still hadn’t left; I was glad to have a different place to wait to see what was going to happen as there were some very tired and angry people waiting for that one. We heard the cheer when they were allowed to board from where we were, all the same. Up till then things had been extremely frustrating: CNN, broadcasting loudly over our heads, was telling us all that the Atlantic was shut and we’d had it, and the airline employees who could be found said they didn’t know, but to anyone who was alert it was plain that the signs were good: the cabin staff were waiting to board, as soon as the plane was there it was restocked with food and our baggage was loaded. The airport clearly thought we were going, but still people went off to find someone else, who didn’t know anything either but was happier than they were to make stuff up, and then coming back and reporting this hearsay as clear evidence that we weren’t going to be able to get home. This is why the critical disciplines are needful in education, people, so that people don’t panic and start demanding hotel vouchers on the back of uninformed guesswork. Anyway, they let us on when they were ready and then waited a short while longer and eventually we headed away and we were two hours late back, so I missed my planned bus home but on the whole it was still the most comfortable long-haul flight I’ve ever taken, I managed to sleep a bit and one of the important lessons I learnt from this whole trip was that the extra money you pay for flying British Airways across the Atlantic is worth it, because everyone else I knew on this journey was flying American and were rather later and less comfortable. 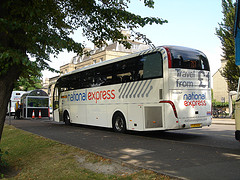 And then I went to work, not to do any but in order to pick up and fix a new bicycle on which to ride home on the back of a few hours fitful sleep and imminent jetlag, an effort which caused at least one good friend to diagnose me as completely mad, and this may be true (especially since I had stupidly had the bike tools in my carry-on, which gave the security at O’Hare some pause for thought) but it seemed an appropriately odd end to a long journey in which a wide range of silly things had happened as well as serious ones, and almost all of them fun. If I could get someone else to pay I would happily do it again next year. And thereby hangs another post I have yet to write, so I’d better get on with the backlog… Mind you, the books I bought and had shipped back only arrived at work today, so in some sense the whole saga has only now closed; but an awful lot has been happening meanwhile!

12 responses to “Kalamazoo and Back, V: say your piece and get”