Why should political unity have been a Church goal, actually?

Obverse of penny of King Edgar

I’m aware that medieval posts proper have been few and far between around here just lately, and again I can only say, I’m afraid that this is because I’m busy with big things not small things. However, I have been working my way through my boss’s copy of a recent conference volume, Edgar, King of the English 959-975, ed. Donald Scragg (London 2008), which he has kindly lent me and which therefore jumps the to-read pile so that I can give it back soon. I’ll do a full post about the book when I reach the end of it but till then there’s something I’d like to canvass opinions about.

The idea keeps coming up that Edgar’s apparent imperium of Britain, as epitomised for many by the episode at Chester in 973, after his maybe-second coronation at Bath that year, when six Celtic kings rowed him across the River Dee, is a later fiction or at least an enhancement of a less imperial presentation of the time. It seems to be accepted by all commentators, but especially two,1 that this is a natural thing for the Benedictine reform movement to promote, because they were generally in favour of single monarchical rule of the whole island. So, Frederick Biggs argues that not just the reformers but Bede before them elide uncomfortably over the frequent joint kingships seen in early Anglo-Saxon history, of which he argues Edgar and his brother Eadwig, ruling 955-959, was probably the last. Why? And Julia Crick takes apart the unusual usage of the term ‘Albion’ in many of Edgar’s charters and places it in a reformist context as well. 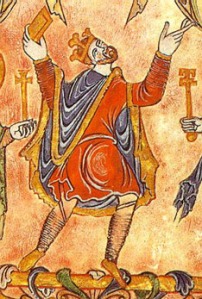 King Edgar prostrate before Christ, as depicted in the New Minster of Winchester's foundation charter

I may be missing something obvious here, but, why should the reforming Church be pro-monarchy? The usual argument seems to be that God is a single ruler therefore that was the order the Church would wish to see in the world, celestial and worldly hierarchies matched. To me this fails on two levels: firstly because if it were so you, as reform churchman, would then want your king under the pope or an emperor. If you’re willing to defend any less of a political unit than Christendom as a viable independent polity, then you’re not really arguing for analogy with Heaven, surely. Secondly, it jars with so much contemporary ideology, including the reform one that eventually got worked out through the Investiture Controversy, that proper worldly rule is carried out by a king but advised by his bishops, who ultimately hold sanction over him. We see this with Hincmar of Reims, with Jonas of Orléans and probably some of the Fleury guys so influential on the English reform too, though I don’t know that for sure. This proto-Gelasian power-sharing between Church and King is quite unlike the cæsaropapism of which Edgar has been accused by, for example, Eric John.2

Then there’s the power argument. A Church which is a single structure represents a better chance of coming to ultimate power at the top of it, you might argue; a big pond is essential to being a successful big fish. More prosaically, the more lands your king rules the more bishoprics, abbacies or chapels there are for him to hand out. But those churches are always in the power of someone: it doesn’t seem a natural thing to me that one’s odds of promotion are better hanging around Winchester with a lot of other clerics than, for example, hanging around one of the other royal courts of the British Isles of the time hoping to make good from another king. Maybe there are lots of them too and we just have the winners’ writings…

I suppose the third argument is that if you really believe that reform is essential, you can effect this most easily if everywhere is under the power of one ruler that you can influence. But does that really lead you to be uncomfortable with the idea that rule at other times might not have been monarchical and all-British? And what’s Bede’s excuse? He’s quite clear that long periods exist in English history with no overall ruler, and indeed brushed over the preeminence of Æthelbald of Mercia in his own times quite carefully. This isn’t really a point of view they can really have hoped to disappear merely through writing nice things about Edgar at Chester as the Danes threatened. I just don’t buy it. At the very least this is an unchecked assumption about Dunstan’s and Æthelwold’s world-views that I’d like to see based on something more substantial. Perhaps that argument is elsewhere in the book…

14 responses to “Why should political unity have been a Church goal, actually?”