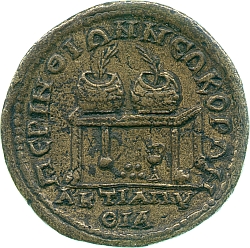 Reverse of a large bronze coin of Perinthus, Thrace, struck in the name of the Emperor Caracalla, 211X17 A. D., Leake Collection, Fitzwilliam Museum Cambridge, CM.LK.4570-R

I’m sorry to have left you so long with no update. There is an exhibition imminently starting at work that is meaning less slack time than usual (and also the digitization of shiny artworks, see above), and I’ve been busy at home too in various ways. I also don’t have much new content, though there are three posts written up I’ll let sneak out in the next few days if time permits. This is a pity, because Archaeologyknits, the editor of the latest Carnivalesque did me the great favour of linking two of my posts, so I thought I should ensure that any new visitors at least know this thing is still switched on.

I have not however been absent from the wider blogosphere, in fact I seem to be involved in arguments and conversations every which way at the moment, so if you’re really hungry for my peculiar style and patchwork knowledge, you can follow some of them up. Or, you could do it instead because they are interesting. Several of these seem to involve archaeology: the inimitable Gesta, one of the few of us who can do both that and texts, is back to teaching the answers that lie in the soil after some time spent away from the discipline, and has been freshly struck by how teaching differs between the two subjects, in her (and my experience) at least. So I’ve been weighing in there but it’s a subject which more could easily join. Then, Henrik Karl seems to have been suddenly very Internet-present lately (possibly because of his current liberty from the drudgery of toil—could you do this job, Henrik?), and has been lamenting the fact that Danish history is effectively deemed to start in 1100 by historians because they don’t talk to archaeologists and the archaeologists don’t read the history and so on. This is a wider problem, about which I’ve written before, but at his own blog he is dealing in bigger matters, some much more fundamental stuff about the way archaeologists interpret burial, and this conversation too is turning into a broader reflection on the discipline.

More insular, or as has been commented, peninsular, is a conversation between myself, the notorious Notorious Ph. D. (why haven’t I been reading that blog before?) and Clio’s Disciple over at the last-named’s place about why Spain is so often seen as an exception from the wider courses of medieval history, and how far this is justified. Many a true thing about history and historians is being said there, if you study Spain or if you study Cispyrenean Europe (look it up, I had to) you may find it of interest.

On the other hand, if you’re in either London or Cambridge this term, or could be, you needn’t confine yourself to virtual discussion. Squeaking into my INBOX with mere days to spare, the schedule for this term’s Earlier Middle Ages seminar at the Institute of Historical Research is now published, and though overall the details are as holey as one of Kurt Cobain’s favourite sweaters, there are some very interesting looking things there. (The web version has as yet only the one date, so the full programme is hidden as a PDF at the end of this link.) This of course by now we expect, but completely unexpected is a parallel affair in Cambridge, the new Cambridge Late Antiquity Network Seminar, the brainchild of Dr Alice Rio. Alice is greatly to be fêted for this; I have myself messed with the idea of an interdisciplinary seminar in Cambridge in years past and found the faculties’s incredible inertia just unsurmountable, so she truly has done a difficult thing here, and furthermore got sponsorship and an incredible list of speakers together. The poster is concealed as a PDF under the small PNG version above. (Edit: the seminar web-page was apparently up even though I couldn’t find it, and is in fact here.) It should be noted, by the way, that this appears to be part of the Chris Wickham UK Tour; as well as appearing in both schedules, he’s also giving the 2008 Creighton Lecture at Kings College London on 17 November, and as his title is “The culture of the public: assembly politics and the ‘feudal revolution'” I think I rather have to be there.

So: ways to have academic fun in the absence of my blog, some of which I shall be doing myself until I get some virtual hands free: enjoy…

7 responses to “Things are happening elsewhere”